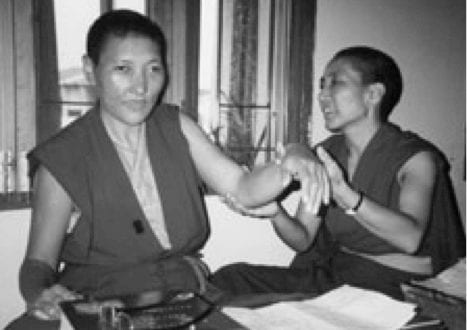 Years ago, Judyth O. Weaver, PhD was invited to Dharamsala, India to work with Tibetan Buddhist Nuns who were living there as refugees in exile. This story is quoted from an article on her website: Touching Our Human Essence – Leading Sensory Awareness Classes in Different Cultures. Click here to read the full article including several moving and insightful stories about offering Sensory Awareness to people from diverse cultures and backgrounds. 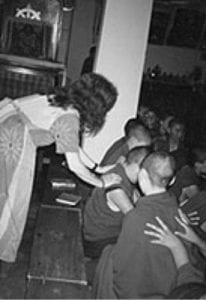 “Many of the nuns had escaped from Tibet, having been tortured and abused in various horrible ways; their’s is not a way of life that affords the time and space to “be sensitive” but which demands a sensitivity and paying attention to what is happening in order to survive. They have many physical complaints – among the most common are severe headaches, neck, back and joint pains, and gastrointestinal problems.” Fifteen nuns showed up for the first workshop.

Judyth writes that initially when working in pairs “their concern was so focused on the other person”, that they were not aware of their own experiences but very tuned into that of their partner in the experiment.

“As we worked they gradually became more sensitive to all that was happening, within themselves and others. What fun to watch them recognize the movement and affect of their own breath in their bellies, in their lung tips, and then being able to more sensitively recognize it within the other person and thereby receive more information regarding working with the other person, the whole person.”

“The progression during the ten days, two classes a day was exciting and gratifying. They learned some therapeutic massage techniques, specific to their needs. We also focused on foot reflexology and I was able to teach them a bit about the cranium and how to begin to work with that. Sensory Awareness was a basis of it all: the awareness of how to approach a person to touch, the sensitivities and respect required in the giver and the receiver, the affects and responses. They learned the power of contact in the somatic realm and how much can be accomplished, and the efficacy and healing that is possible by the grand simplicity of being there on all levels.”

Weaver has continued to support these wonderful, courageous people, offering Sensory Awareness and anything else from her broad background that could be beneficial.

In 2016, Judyth was in Dharamsala, India to witness the Dalai Lama in the conferment of the Geshema Degree to twenty Tibetan nuns. They are the first females to earn this degree which often requires over 20 years of study. A Geshema Degree is equivalent to a PhD in Buddhist philosophy. 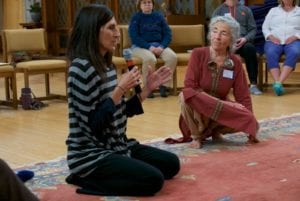 Judyth Weaver with Elizabeth Castagna at the 2017 East Coast workshop

What are the differences of leading this work in different cultures? “My answer is basically, “none.” The culture that Sensory Awareness works with is the human culture; the specific country, language, or way of dressing is not the level where we meet. Our work goes underneath the vagaries of cultural experience and reaches down to the foundational essence of human nature. I am awed and thrilled about our basic humanity every time an experiment is met with honesty and human grace and a person, no matter what their homeland, is affected.This does not mean that there are not many cultural concerns and variations that need to be attended to. On the contrary, I want to be especially careful and not violate any cultural issues so that the students may feel safe and free to explore without worry that they be offended or need to protect themselves. I err on the side of safety, and consequently many experimenting situations that I would use in my familiar western context, I forego in other countries.”