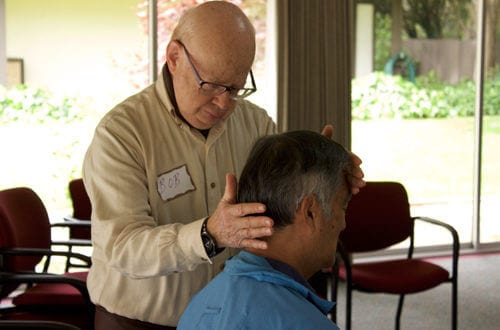 Taking a fresh look at the natural world – with or without a camera – is at the heart of Bob Smith’s Steps to Seeing classes on Monhegan Island in Maine. Bob has been offering these classes for many years in the summer months and he will do so again this summer. Stefan Laeng interviewed Bob about his experience with Sensory Awareness  on March 23, 2015 in Brooklyn, New York. The following excerpt focuses on these classes that Bob offers to visitors of Monhegan Island, Maine. Bob and his wife, Penny Smith, are long-time members of the Sensory Awareness Leaders Guild. They both lead classes on Monhegan Island every summer.

Stefan: When you are on Monhegan, you offer classes based on your experience as a photographer.

Bob: Yes, the Steps to Seeing walks are offered twice a week, one in the morning, one in the afternoon.

Stefan: And the people you get are people who happen be on Monhegan. They are not necessarily interested in Sensory Awareness.

Bob: Yes. We’re speaking about people who have no connection to the work. The idea of the walk began because of people who visited my studio and after hiking around the island they came back and said, “I saw your work, and when I went on the trails I suddenly saw so much more than I’ve ever seen before.” This tossed things up for me and I began to ask myself, what I could do with that? It was music to my ears and I thought, why not take people out to the landscape and share with them how I see it.

Stefan: Tell me a few things that you do in such a class

Bob: I go out to Lobster Cove because that’s the easiest area to access. I ask them to walk in silence and just see what they see along the way. Then, when we’re out there, I start with some experiments, trying to get them to be quiet and see what’s around them. I traditionally have an order of things, a progression. I begin by asking them to find a place where they can stand securely because we’re going to work at times with our eyes closed. Then I ask that they turn around themselves and see the landscape.

Stefan: With a wide view….

Bob: Yes, we’re on a knoll overlooking Lobster Cove. Then I’ll ask them to close their eyes. Our main focus is the visual but all the other sense experiences are available. For example, if it’s a sunny day, I might ask if they can know where the sun is in the sky, without seeing the sun. I’ll ask them if they can tell in which direction the breeze is blowing. Usually there is on the island some movement of air and you can tell which direction it is coming from. Then I ask if they can notice any fragrances in the air. Finally, I ask them to open their eyes again.

Stefan: And maybe hearing? There would also be sounds.

Bob: Yes, the sounds, the ocean, and the birds. Then they open their eyes and I ask them to begin turning around themselves slowly. I suggest to them that there are three ways of seeing the landscape. There’s the vista, the distance, there is middle ground, and then the close by. I ask them to turn around themselves, being aware of these three divisions while they’re observing and seeing the landscape. And then, when they get back to where they began, I ask them to start circling again in the opposite direction. I find that one thing adjacent to another can appear differently, depending on which way you’re turning, what you see.

“There are paintings everywhere!”

Then I ask them to come together and we share what the experiences have been for that first part. What I find is that most of the comments are that the experience of seeing what’s nearby was new for them, that they hadn’t really noticed what’s in this immediate area.

Bob: We then proceed further down to the cove and I start working with the contrasts that I see in the landscape. Because I’m trying to build a bridge for them so that they’ll see more and more and more, so that they have a foundation that’s being built upon by contrast. I find what comes to my consciousness in seeing is through contrast. I ask them to just look directly in front of them and name a contrast that they see.

Bob: No, we’re working in general terms. For example, the contrast of color in the landscape. I’ll ask them to notice what comes to them in contrasting colors. Then I ask them to slowly turn around themselves, seeing the one contrast, just color, that they can see all around. When we’re down at the cove other major contrasts are the lights and darks, of rocks, plants, and flowers, the hard and the soft, different shapes, different sizes, and different textures. Whether something is moving or in stasis, living and not living. Any number of contrasts. Then, as they name the contrast, they turn around themselves, and I ask them, if they’ve turned in one direction the first time, to turn in the other direction the second time. The reality is that they can be seeing the same objects but the objects would be revealing themselves in different contrasts. Something next to something they would see that they didn’t even see the first time. My hope is that they can finally build or construct this view of the landscape where they see much more.
I have these rectangular pieces of corrugated where I’ve cut out a window. I call them my automatic cameras. I distribute them and ask that each person go to a place nearby that interests them from their circling experience and that they work in forming compositions with either their camera or with this cutout to see what they see. They spend perhaps ten minutes by themselves in this way.

Stefan: I like that. I especially like the idea of working with these frames instead of a camera.

Bob: Yes. I prefer working with the frames. They’re so flexible. You can bring them to you or further away from you, holding them at any angle, it’s really marvelous. Then we get together and we talk about what we’ve seen.

I’m trying to have them realize that wherever they are they have this possibility of seeing so much more. I again ask them to go into the area with their cutouts and cameras. They’re working for maybe ten or fifteen minutes. Then we get together finally to discuss the entire experience. Invariably, the comments center on the coming to quiet, stepping away from what their normal activities are, and then the ability of having the experience of seeing much more of what’s around them. I share with them that we all came together at a certain time of the day, under certain weather and tide conditions, and that all this can change quite rapidly – that there are endless possibilities.

There was one comment that was made by a fellow that was so profound, yet such an economy of words, the statement was beautiful, it was indelibly etched upon my mind. He just blurted out, he said, “There are paintings everywhere!” I loved it.There are paintings everywhere. Wow. Along the way, several others had told me that “Steps to Seeing” has changed their lives. What a joy to hear.

Stefan: That’s beautiful. And this is something you developed on you own, just following your interest.

Bob: Yes. I have no idea what they’re going to do the following day, or weeks, or months – in their own lives. But I know that in that moment, that period of time, I’ve given them the opportunity to do things differently, or see things differently. They’re really in a different place as far as receptivity to what’s around them.

Stefan: And it’s not about photography, it’s about seeing.

Bob: Yes, it’s seeing. My sign for the walk says that you don’t need a camera.

Stefan: I love taking photographs. But the part with the cutout, the frame, I’m finding very intriguing because you can’t keep the picture, you have to be open for that moment.

Bob: Yes, and there truly are an infinite number of compositions that come to you as you move.

Stefan: Yes. I want to explore this also, I really like the idea.

Finally, I asked Bob if he had ever considered offering such walks in New York City, to which he responded no, because it is for him very much something that belongs to the natural world of Monhegan. But he then added:

Bob Smith can be reached at: go2rsmith@gmail.com