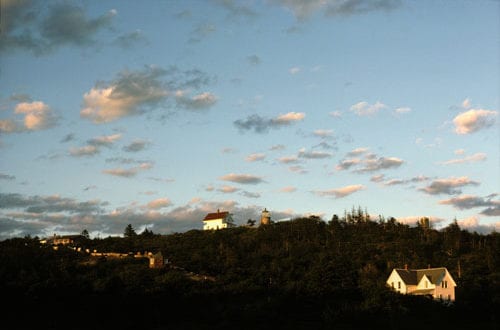 This article is an edited excerpt from the newly published audio tape of Charlotte Selver’s July 28, 1992 class on Monhegan Island in Maine.

There are certain steps we go in breathing. First it is important to be able to allow breathing to have its own way, not to lead it somewhere, not to manipulate it. This in itself is already quite a task that you begin to be obedient to a function which happens in us as long as we live. I don’t know whether you have ever realized that the air is a guest. It’s not your possession. It’s a guest which comes and which goes. And it’s a guest which you need dearly. So it’s a question of to what degree your inner tissues are sensitized enough and appreciative enough that they let you exist fully. The total person, the total organism is involved in the new air coming in, being welcomed, penetrating, doing its job, and then letting go out what has been used. The exhalation is one of the most important things to have. To feel the going out of the air, allowing it go out to the very last. And not already coming in with the new air but letting it have its way.

The question of total reactivity is a very deep question. It has been found that every impression which we get – let me say right now you hear my voice, you hear what I say, you see that I move, you also feel that you are sitting, hopefully – everything which strikes us, our consciousness, comes first into cells in the brain. These cells act like the emulsion of a photographic plate. In the moment you hear something, or see something, or whatever, you are being impregnated. And right away, this goes from there into the entire sensory nervous system. That means you get the message – if you don’t sleep – you get the message from head to foot immediately. From there it becomes conscious, and the thought comes supported by the experience. And from there it comes to the word. But, sais Alfred Korzybski who did a lot of research on this, all this can only happen when the mind is quiet. Only when the mind is quiet can this impregnation and the immediate reaction happen all through. If not, we only live from the head. If yes, we live as a total self. When the mind is quiet we become peaceful and quiet even in the fastest speed. In other words, not this sleeps, and that is awake, and this hurts, and so on, but the whole organism is tuned in for what happens.

In Zen they speak of ’empty mind’. They even speak of ‘no mind’. That means that the head is just as much – could be – as much affected as my hands or my feet or my belly or anything. The head is nothing extra which has to be watchful and constantly observe things and so on. When the head is free, free of all this packed in thoughts and needed occupations, when it is empty, it can react just as my knee, as my hands and as my feet – the total organism is awake instead of just the brain. You see this total reactivity often in animals. You see it sometimes in little children who are still unspoiled. And you can also see it in Zen masters. I always felt that Suzuki Roshi looked just like a child. He was so open, so free, so easy, so modest, so reactive. Why? Because he had no raisins in his head. He was just there for what was happening in the moment.

Have you ever been delighted by something which happened spontaneously? I have a little cat, a little kitten. She is a wonderful teacher for me. Everything is spontaneous. It just happens. The connection, the direction between what you happen to be involved in and breathing is really like the kitten. It changes all the time in connection with what one is doing. Our work, what Elsa Gindler wanted, is like what I heard from Suzuki Roshi many times: to come back to our original nature. You have a question in Zen: “How was your face before you were born?” Nobody else in the world exists the same as you. You are special. Your original nature is different. And so you breathe in or out at certain times. Your reaction to things will come uncalled for. In other words, spontaneous. Not by teaching or whatever.